Carlo Ludovico Ragghianti (Lucca, 18 March 1910 – Florence 3 August 3 1987) has been one of the most important Italian historians, critics and theorists of art of the 20th century.

In 1928, during his second year of the Lyceum in Florence, he meets Eugenio Montale, who makes him discover and read the work of James Joyce. Later, at the Scuola Normale in Pisa, he dedicates himself to the history of art under the guidance of Matteo Marangoni, who is a chief protagonist of the pure figurative method of the art critic.

His aesthetic education is influenced by the thought of Henri Bergson and Benedetto Croce and by the theory of the “pure visibility”. He then deepens the thesis of Konrad Fiedler, Alois Riegl and Julius von Schlosser.

His graduating thesis on Carracci includes so important theoretical cues that Croce publishes an excerpt on the journal “La Critica” in 1933. Giovanni Gentile presents his research on Vasari at the Accademia dei Lincei.

His early essays on cinema and theatre as an expression of figurative art, Cinematografo e teatro e Cinematografo rigoroso (both in 1933), put him among the first scholars who deal with this subject. They create a critique of the performing arts mainly relating to their visual aspects, also researching their historical background.

In 1935, Ragghianti founds, together with Ranuccio Bianchi Bandinelli, and thanks to the interest of Giovanni Gentile (who was one of his former students), the magazine “Critica d’Arte”, to whose direction Roberto Longhi cooperates for a short time. It is the most significant magazine of that time, intending to promote an aesthetical and methodological renewing of the artistic studies.

In February 1937, Ragghianti meets Licia Collobi, who was in Rome thanks to a triennial bursary of specialization at the Istituto di Archeologia e Storia dell’arte. The couple get married on 30 November 1938 in Florence.

As an ardent anti-fascist since his earlier years, from 1934 Ragghianti assumes an important role in recreating the cores of the liberal, democratic and socialist opposition. He sets up a political relationship with Ugo La Malfa, Ferruccio Parri and with the community of “Giustizia e Libertà” in Turin. He also favours their meeting with the socialist-liberals of Aldo Capitini and Guido Calogero. Throough this path, Ragghianti becomes one of the founder of the Partito d’Azione. He draws up in December 1941 the first programmatic document, the well-known Sette punti, approved in July 1942. In March, Ragghianti is arrested in Modena where he has been forced to live by the regime from 1940. His condemn to the internal exile is then commuted to admonition, but in April 1943 he is imprisoned again. Denounced to the Special Court he is released on 26 July 1943 after the downfall of the regime.

Put as guidance of the military Committee in charge of organizing the Resistance in Tuscany, he founds the Brigate Rosselli, which he guides until June 1944 when he leaves his role to Nello Niccoli, maintaining the role of War Commissioner. He assumes the presidency of the C.L.N. (Comitato di Liberazione Nazionale) in Tuscany in August and heads the provisional Government, which leads the insurrection against the fascists in Florence, which is liberated on 11 August 1944.

As Secretary for Education, with responsibility for Arts and Entertainment, during the Government Parri (1945), Ragghianti takes effective measures for the reconstruction of the national artistic heritage and initiates important interventions. During the first National Congress of the Partito d’Azione, in February 1946, he leaves the party together with its minority, and follows Parri and La Malfa to the Movimento della democrazia repubblicana. After the elections in April 1948, he continues its political commitment especially in the cultural sphere.

The cultural commitment during the after war period

After the crisis and the dissolution of the Partito d’Azione, Ragghianti comes back to the university life and becomes a professor in Pisa after his master Matteo Marangoni. He will teach from 1948 to 1972. In 1952, with the continuous and tireless collaboration of his wife Licia Collobi and the support of Adriano Olivetti, he founds and directs, until 1965, the art magazine “seleArte”, which is extraordinary for the wideness of the treated themes and contents. Issuing more than five thousand copies, distributed in Italy and abroad, the magazine becomes a point of reference in directing the general public towards art, arousing widespread attention for the multiple phenomena of the figurative world.

During those years, he produces most of his twenty-one critofilm (from 1948 to 1964) and particularly the eighteen of the “seleArte cinematografica”, born with the support of Olivetti. Thanks to them, Ragghianti makes the cinematography means an effective instrument of critic research and information, trying to reconstruct the visual and formal paths of the works of the treated artists.

His interest in the political life is also expressed through the magazine “Criterio” (1957-1958), inspired by the values of democratic and progressive components of the Resistance. However, he mostly expresses it through unforgettable ideological campaigns, such as the ones for secularism of public schools, for university autonomy and for the effective protection of the artistic heritage. In 1966, after the disastrous flood in Florence, he promotes international efforts to find compensation for the damages suffered by the cultural heritage.

Ragghianti expresses the variety of his cultural interests in his researches, from the volumes to the many essays, all finalized to create a deep awareness of the dimensions of the figurative universe, and published both on “seleArte” and on “Critica d’Arte”, which Ragghianti will direct until his death.

In the University Institute in Pisa, under his directed, and together with a large group of assistants, Ragghianti creates an original educational model for visual art scholars, combining theoretical thought, research on the museum collections, most traditional fields of study with usually neglected spheres, such as city planning, industrial and performing arts, cinema and the artistic expressions of ancient and far civilizations

After the student protests in 1968, Ragghianti gradually begins to detach from the academic world. He founds the Università Internazionale dell’Arte (U.I.A.) in Florence, an institution aimed at creating high professionalisms in the field of the study and protection of cultural heritage.

The method of analysis of the work of art

Most of the fundamental reasons for Ragghianti’s scientific activity, can already be found in his earliest works, such as the mentioned degree thesis on Carracci: Ragghianti is a convinced supporter of Conrad Fiedler’s thesis, according to which the figurative language is different and autonomous compared to the verbal one, but it is, like the verbal one, a form of knowledge. Based on the Crocian distinction between poetry and non-poetry, Ragghianti identifies in the figurative language, together with the poetic uses, also the prose-like ones, and considers positive the latter in relation to the forms to which they refer.

The nature of self-awareness inherent in both poetry and figurative prose thus makes every conscious figurative activity a historically determined process of deepening humanity. Thus Ragghianti, from the beginning, but then with growing awareness, abandons any regulatory framework and any aestheticizing digression in the analysis of works of art. He identifies, in an analysis of the historical connections of the artistic forms according to the thought of Julius von Schlosser, the complex human reasons through which the individual artist creates the single form.

Some main strands emerge in the scientific production of Ragghianti, multifarious but characterized by his original method. His thoughts of art philosophy aims to reconstruct the progressive historical clarification of issues in their aspects in the continuous comparison with the thoughts of others and with the militant critic exercise. His contributions are then collected in volumes such as L’arte e la critica (1951), Il pungolo dell’arte (1956), Diario critico (1957), Arte, fare e vedere (1974 and 1986), Arte essere vivente (1984), La critica della forma (1986) and the monumental work in three volumes Arti della visione (1975, 1976, 1979), a synthesis of his studies on cinema, theatre and philosophy of art.

The volumes Commenti di critica d’arte (1946) and Profilo della critica d’arte in Italia (1948) belong to the field of the art theory and methodology, while the catalogue Arte moderna in Italia 1915-1935 (1967) represents a philological and historical review of a neglected time. Impressionismo (1944, second issue 1947), Giacomo Manzù, scultore (1957) and Mondrian e l’arte del XX secolo (Premio Viareggio 1963) are examples of the interpretation of contemporary art.

Ragghianti tackles many different themes, bringing new perspectives arisen from his original methodological openness. In this way, in Pittori di Pompei (1963), he deals with the questions of the relationship between originals and copies in the classical art and with the autonomy of the Roman art compared to Greek art. The issue of the evaluation of the prehistoric artistic artefacts is connected to the arising of the human conscience. The series of studies on critic and philological organization converge to works such as Pittura del Dugento a Firenze (1957), Medioevo europeo (1978), to the volumes of L’arte in Italia (1968-1969), Filippo Brunelleschi. Un uomo un universo (1977) and Periplo del Greco (1987), or to shorter and unfinished monographs on Michelangelo, Caravaggio and many other artists, all turned for reconstructing the contribution of the artists to history. In this way, an extraordinary example is the volume Mondrian e l’arte del XX secolo (1962), that examines the connection between tradition and innovation in the historical avant-gardes during the beginning of 20th century.

Ragghianti curates some unforgettable exhibitions in Florence, mostly during the 1950s and 1960s, such as those dedicated to the masters of architecture of 20th century (Frank Lloyd Wright in 1951, Le Corbusier in 1963, Alvar Aalto in 1965).

His devotion to the social duty of culture is another essential aspect of his personality (contributions concerning reforms of the public cultural institutions and university, the laws on conservation of cultural heritage, radio and television, school, art education, the introduction of the teaching of the history of cinema). He deals with these subjects also as a member or president of institutions such as the Società Italiana per l’Archeologia e la Storia dell’arte and the ADESSPI (Associazione Difesa e Sviluppo della Scuola Pubblica Italiana), whose periodical “Scuola e Costituzione” he directs from 1959 to 1962. One of the tangible effect reached by Ragghianti is the secondary school compulsory education.

The creation of institutions of art and culture

Ragghianti founds and promotes many cultural institutions. The Institute of Art History and the Raccolta nazionale di Disegni e Stampe of the Pisa University, the Strozzina in Florence (1949-1966), the main core of the museum of contemporary art in Florence, born with the acquisition of the collection of Alberto della Ragione and with the donations of the artists called to integrate the artistic heritage damaged by the flood. The Università Internazionale dell’Arte (1969) and the constitution of the Centro Studi sull’Arte Licia e Carlo Ludovico Ragghianti, to which he donates his own library, photo-library and archive.

The term critofilm, coined by Carlo Ludovico Ragghianti, indicates a particular type of film, visual and practical means in which the interpretation and reading of the works of art is proposed according to the expressive, aesthetic and technical characteristics of cinema.

The LUK magazine is an overview of the studies and initiatives promoted by the Fondazione Ragghianti. 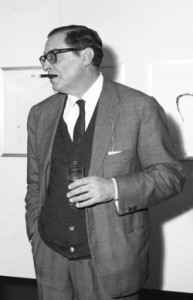 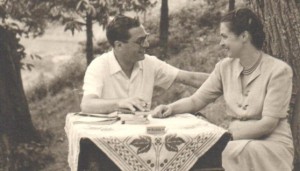 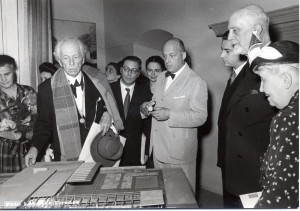 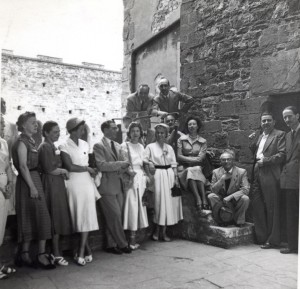 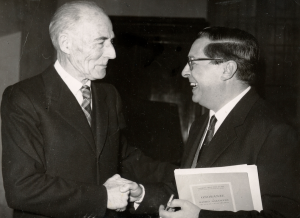 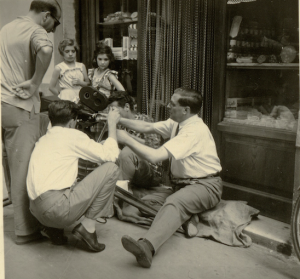 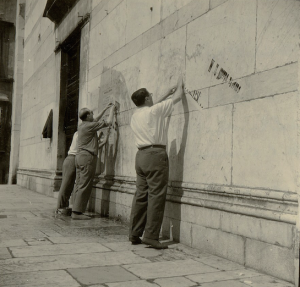 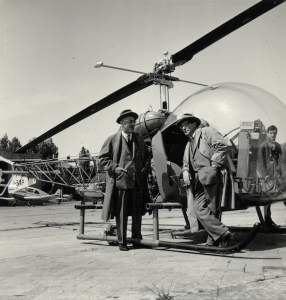 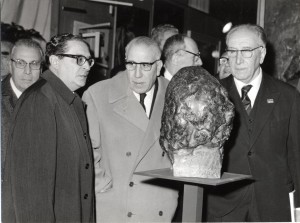 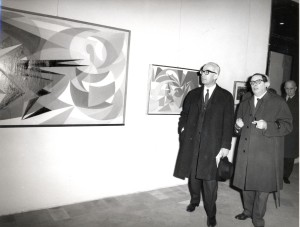 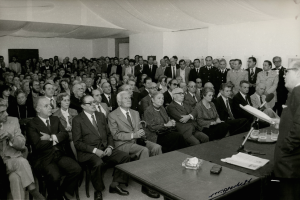 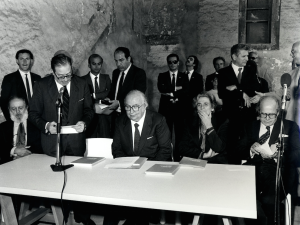